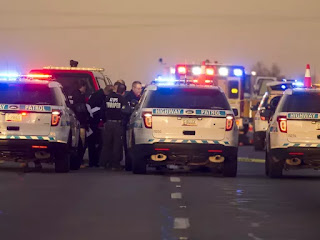 It's no surprise that the SHR Media Network and the Bloviating Zeppelin all believe quite strongly in the need for a very secure and firmly supported Second Amendment because, as we who write and speak about controversial subjects (not so "controversial" a few decades ago), it is the Second Amendment which buttresses the very foundation of the First Amendment.

It is also no surprise, then, to those who read and visit this site and those of the Bloviating Zeppelin and the other fine artists, speakers and writers assembled here, that we also support our brothers and sisters in law enforcement, the American military and emergency responders nationwide.

That said, it is continually proven on a daily and hourly basis that the founding fathers were indeed brilliant men. Here is just one example, from Breitbart.com:

On January 12, an armed citizen stopped and killed a man who was beating an Arizona State Trooper on the side of I-10.

The incident occurred early Thursday morning on about “50 miles west of downtown Phoenix.”

According to KTAR News, the trooper had stopped to investigate a rollover accident at about 4:30 a.m., when someone opened fire, shooting him in the shoulder. The alleged shooter then began to beat the officer. An armed citizen and his family were driving by when they spotted the officer under duress.

The citizen stopped the car, ran toward the officer and asked if he needed assistance. When the officer said “yes,” the citizen ran back to his car, grabbed his gun, then returned and “demanded the attacker stop."

The attacker refused to stop, so the citizen shot him multiple times, killing him.

In six words, I call this "a story with a happy ending."

Arizona Department of Public Safety Director Col. Frank Milstead said, “I don’t know that my trooper would be alive without [the armed citizen’s] assistance.”

Ready for the kicker?

Also on January 12, the New York Times editorial board wrote against expanding the opportunities for armed citizens to be armed for self-defense. The paper claimed, “The grim truth is that concealed-carry permit holders are rarely involved in stopping crime.”


Conversely, cops are under assault like no other time that I can recall since the 1970s, when I first entered law enforcement. Those were the times when police stations were bombed and it was customary to look under and around your patrol unit for potential IEDs. Those were the days when the Black Panthers, SDS, Weather Underground and other militant Leftists groups were routinely killing people "in the name of freedom." Yes, then as now: Leftists.

To our founding fathers and likely from Trooper Edward Andersson, I say "thank you" for your brilliance.