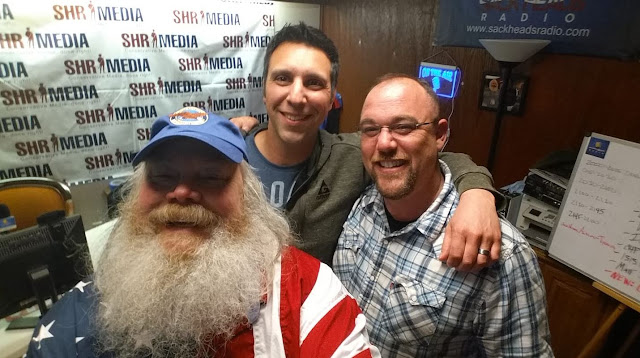 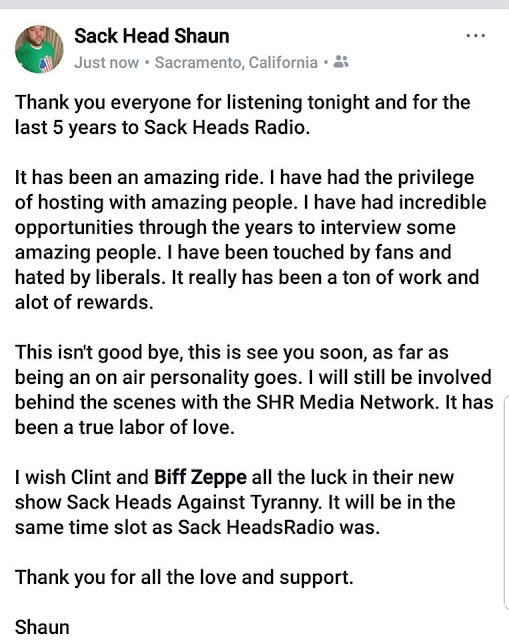 First there was denial, then anger, then bargaining. Shaun and I tried to bargain the fuck out of the situation, but it just wasn't workable. We're both kinda depressed right now. Give it time; we'll hit acceptance. Time wounds all heels.

You know how you go through stages in life where the bear opens your lunchbox and just shits right on your sandwich? That's been Shaun recently and myself as well, but for vastly different reasons. Just when you think you've hosed it out, poured bleach all over the damned thing, rinsed it thoroughly, let it sit in the sun to dry and then made another sandwich?

Yeah. The bear opens your lunchbox and shits on the sandwich again.

Too scatological for you? Hold that thought and keep reading.

It makes me sad, but perhaps not in the way you're thinking.

I retired in 2016. Since then I've had a bit of difficulty in retirement, having gone from the Type A job I possessed in law enforcement to, the next day, completely irrelevant. In my mind. I met Sack Heads Shaun on Twitter and explored the possibility of getting my own radio show on their air. Shaun and I met at the Starbucks on Stockton Boulevard to discuss the situation and, after the meeting, I noticed I had a parking ticket on my windshield. Fucking City of Sacramento.

This was an opportunity to get back into radio because, decades before, I had worked in terrestrial radio for KFBK AM and FM, KERS, KEG, KNDE, KOBO as well as WWSU and WING back east. Those were the days of Sparta boards, Sparta turntables, Sparta cart decks, Ampex reel-to-reel tape machines and sound editing where you physically cut tape on horizontal metal editing bars in either a block or diagonal cut with a razor blade. And white editing tape. No. I'm not kidding.

After the meeting, Shaun was kind enough to invite me on the June 22nd, 2016 Sack Heads Radio Show. That was my very first appearance. He warned me about Clint, though. "I think he'll be good with this. I'm not entirely sure. But I think so." My. That was reassuring.

In truth they were both welcoming and I soon became a staple on the Sack Heads. It wasn't until I carried their luggage at the July 2016 Freedom Fest in Las Vegas that they began to realize: "hey, this old fat fart is for real. He really does want to be on our network." They flew to Las Vegas. I drove to Las Vegas with all their equipment in the back of my Kraut Kar SUV.

Like a bad tick that was dangerously embedded they finally realized I wasn't going away. And that I would yield actual physical labor for them. I didn't produce my first show on the SHR Media Network until Tuesday, January 17th of 2017.

Since then both Shaun and Clint have garnered not only my everlasting thanks but my undying loyalty as well. Providing me with an outlet to vent -- as I'd been writing a Conservative political blog since 2004 at BloviatingZeppelin.net -- this became the perfect confluence of diversion, application, concentration and, truly, therapy. Here were two guys with similar backgrounds to mine and whose Conservative philosophies happened to mirror mine as well.

That said, I'll have to make my own personal revelation. They happened to save me. I was rudderless and searching for anything solid in tumultuous seas the likes of which I'd never before navigated. Irrelevance was a status I'd never yet experienced. And yet irrelevant I was. In the course of one day.

But the Sack Heads centered me. They gave me something to look forward to. They managed to provide some personal dignity and relevancy. It felt like I'd really found a new home with some very good new friends. And for that I shall never forget their kindness.

The Sack Heads rescued me. Truly. 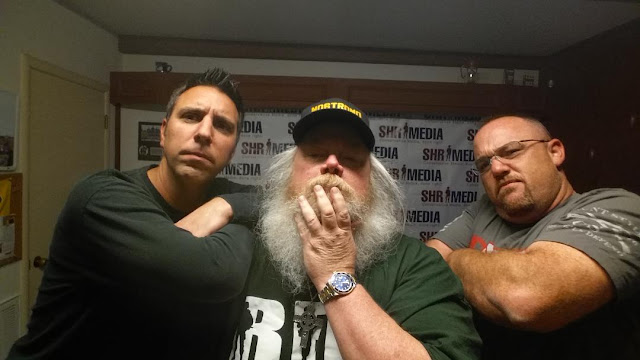 That, frankly, is why not having the Sack Heads Radio Show to look forward to every Wednesday night leaves a chunk taken out of my heart. It really is painful.

Yes, I know, Shaun isn't really going anywhere, all of that. But haven't you been in a situation where just the presence of someone or something was comforting in and of itself and immediately jarring and destabilizing when, suddenly, it's no longer there?

At the beginning of the show we provided a moment of silence for the 50th anniversary of the assassination of Dr Martin Luther King Jr.

Sack Heads Shaun and Clint then talked about the inception of their show, how it managed to grow, how the SHR Media Network was born and how it led to any number of associations and friendships with persons too numerous to mention.


If you want to listen to the show in Spreaker, click on the yellow button to the upper left.

If you want to watch the show on the SHR Media YouTube channel, click on the red arrow below.

Due of various scheduling issues Shaun had to step away from the Sack Heads Radio Show. And frankly, it's not really Sack Heads without Shaun. Which is why the show had to cease.

And why there is a replacement -- at least until Shaun can somehow rectify his situation. Because, after all, Shaun and Clint worked long and hard to build up a Wednesday night audience. They decided they didn't want to let that audience wither and blow away.

That's where Sack Heads AGAINST TYRANNY comes in.

And it begins next week.

It really is a SHAT show.