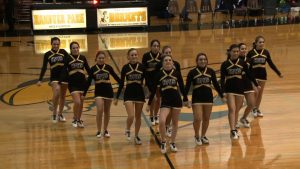 A New Jersey mom went to her daughter’s school and complained about her not making the cheerleading squad — so now everyone gets to make the team.
​
“All my hard work has been thrown out the window,” seethed cheerleader Stephanie Krueger about the ruling during a Board of Education meeting last week in East Hanover.

“I tried my hardest. Now everything is going away because of one child who did not make the team, and their parent complained.”

Instead of having tryouts and making cuts, cheer coaches at Hanover Park High School have decided to let everyone participate. The school’s athletic director said they changed the policy as a direct result of the mom’s complaint.

When asked to do away with the new rule, officials threatened to scrap the 10-member squad altogether — telling parents and students that everyone makes the team, or nobody does.

The school claims it wants to make cheerleading more “inclusive” and says it plans to stick by its decision. The local board of education is reportedly reviewing the policy.

Read more.......
Email ThisBlogThis!Share to TwitterShare to FacebookShare to Pinterest