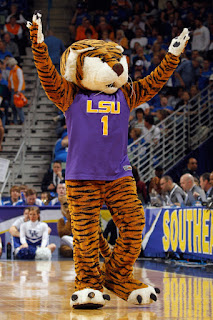 A group of LSU students is claiming that the school's tiger mascot is a symbol of racism and violence. Their snowflake progressive heads will really explode if there is a straight, white, male inside the tiger suit.

Students at Louisiana State University have started an online petition urging the establishment to change its “Tigers” mascot, claiming it’s the symbol of “white oppression”.

The petition, which has so far attracted 450 signatures, says the mascot was picked by “powerful white males” in tribute to “a Confederate regiment called Louisiana’s Tigers,” who were “known for their propensity for violence on and off the battle field.”

“Louisiana State University named their mascot the Tigers, and they named it during the height of Jim Crow South. This was a time when black men feared for their lives, and were treated as sub human. This symbol is the most prevalent confederate symbol in the United States,” the petition’s opening reads, Campus Reform reports.

The petition’s author claims the mascot is “incredibly insulting” for African Americans because they have to “attend a school that honors Confederate militantism.”

All the leftist stupidity is coming out now. Many progressives are apoplectic. I mean, walking around in tears, bemoaning the end of civilization, that sort of thing.

Some are out in the streets, burning Trump effigies as is done in Iran and other primitive 3rd world regions. Some are openly tweeting for "presidential assassination".

America does not want to be ruled by a smug, know-it-all progressive elite that seizes control of the federal government to force us to align with their false leftist narratives.