It's official: fuck the NFL

Reprinted by permission from BloviatingZeppelin.net. 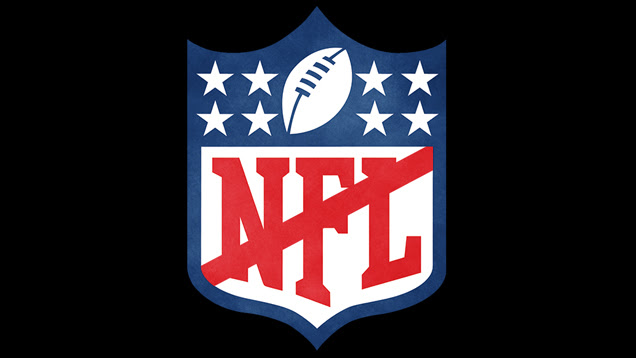 You just drew your final line with me, National Football League. You and all your sponsors and your Leftist sycophants at ESPN can all go to hell.

You are dead to me. 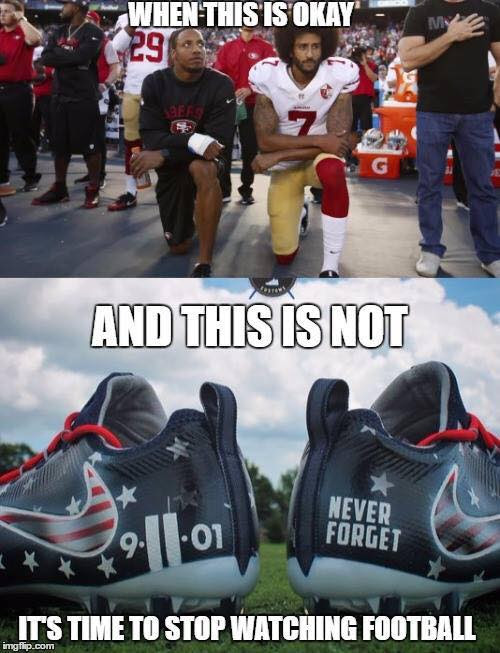 What's acceptable and unacceptable in the NFL. The bottom are shoes of Tennessee Titans player Avery Williamson who was threatened by the NFL and Commissioner Roger Goodell when he wanted to wear them in honor of 9/11.

Also, remember when NFL Commissioner Goodell refused to allow the Dallas Cowboys to wear a sticker honoring five murdered Dallas Police officers in 2016? I certainly do, as I wrote about it in August last year. 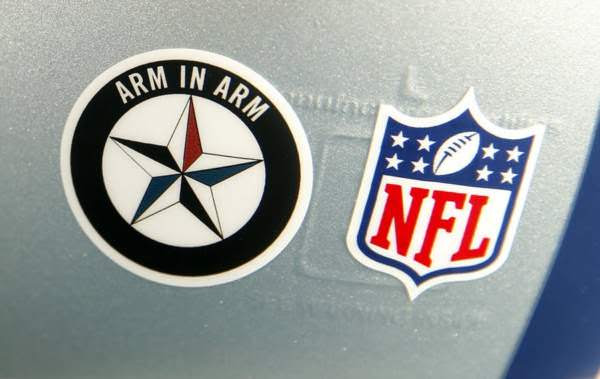 Here is the heinously-offensive sticker that had to be removed and never further applied. A five-pointed star, with each point to represent one murdered officer.

by Daniel O'Leary The NFL has gone from the No Fun League to the No Feelings League. According to the Fort Worth Star-Telegram, the Dallas Cowboys filed a petition for permission to wear a helmet decal memorializing the five officers killed in a tragic shooting in Dallas back in July. The decal featured a star - similar to the one featured prominently in the Dallas PD logo - with a black circle around it and the phrase "Arm In Arm," to signify support for the police and the Dallas community after the tragedy. The Cowboys opened up training camp while walking with their arms interlocked with members of the Dallas police department. The team has worn the decal on its helmets during training camp, but will now have to be removed. According to the Star-Telegram, Cowboys VP Stephen Jones said the league had already rejected the team's petition to wear it during the regular season but extended the ban to the preseason as well.

"Expanded the ban to the pre-season as well." Translated: not just no, but hell no. Anyone perceive the slightest bit of hypocrisy? Anywhere? Let's first start with this, as the Ravens and Jaguars decide to all take a knee across the pond at Wembley Stadium in England this Black Sunday the 24th.

In rebuke to Trump, Ravens and Jaguars take a knee in London during US national anthem

About two dozen players, including Baltimore Ravens linebacker Terrell Suggs and Jacksonville Jaguars running back Leonard Fournette, took a knee during the playing of the national anthem before the start of the teams' game at Wembley Stadium on Sunday. Other players on one knee during the performance included Ravens linebacker C.J. Mosley, wide receiver Mike Wallace and safety Lardarius Webb as well as Jaguars linebacker Dante Fowler, defensive tackle Calais Campbell, defensive end Yannick Ngakoue and cornerback Jalen Ramsey.

Of course not. That might offend the Brits. They're a new and expanding market. 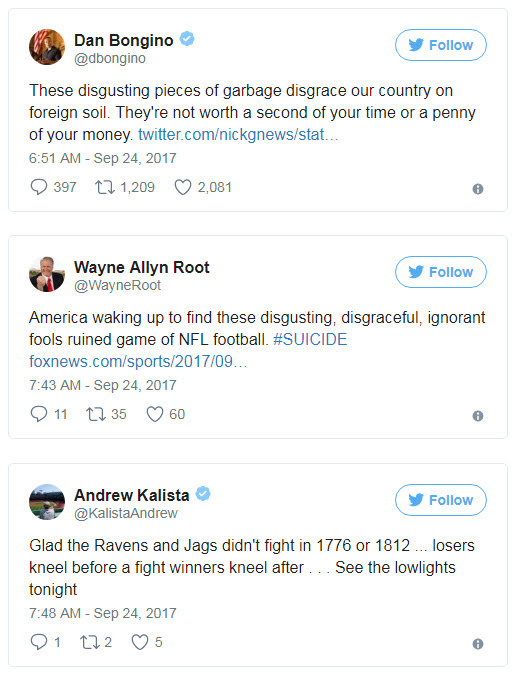 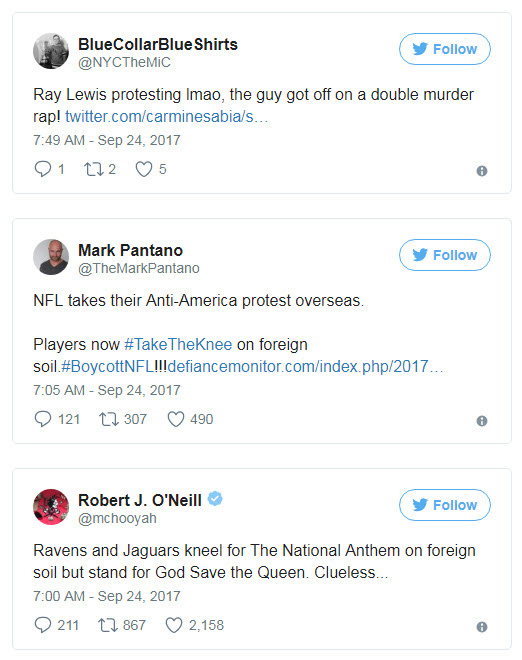 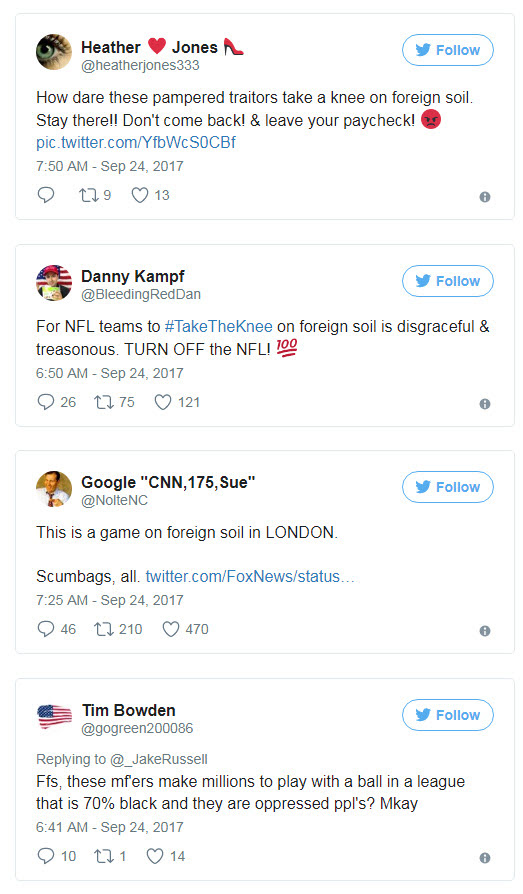 Then there is this, from ESPN.com. I want you to see and read how this is crafted by ESPN and Leftist journalistas.

Steelers remain in locker room during the national anthem

by Jeremy Fowler CHICAGO -- In a sign of solidarity, the Pittsburgh Steelers stayed in the locker room during the national anthem before their 1 p.m. ET kickoff with the Chicago Bears. As the anthem began in Soldier Field, several Steelers coaches were on the sideline, including head coach Mike Tomlin, while the players were not present. Offensive coordinator Todd Haley, offensive line coach Mike Munchak and running backs coach James Saxon also were spotted.

ESPN translation? Race traitors and racists, every one of them.


Players took the field within a few seconds of the anthem's end, just after fireworks launched, with quarterback Ben Roethlisberger one of the first players out of the tunnel.


Left tackle Alejandro Villanueva, an Army Ranger who served in Afghanistan, was seen on the CBS broadcast at the edge of the tunnel during the anthem, hand over heart.

The entire Steelers team stayed in the locker room for national anthem except for Villanueva who served 3 tours in Afghanistan. A true hero pic.twitter.com/nnDsHrwym3
— Rowdy Americans (@RowdyAmericans) September 24, 2017 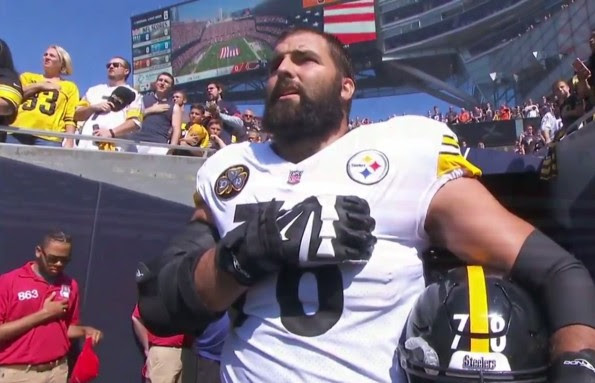 Trust me. There are already Leftists readily attempting to identify and locate the black employee at the bottom left of the photo, hand over heart like most Americans, in order to expose him, humiliate him, embarrass him, perhaps even harm him.

He was outside. Standing. One man. Hand over heart. During the national anthem.

One man who had served in the US military, who had served his nation and who had the courage, the balls, to be the one Steeler who honored and respected the US flag. 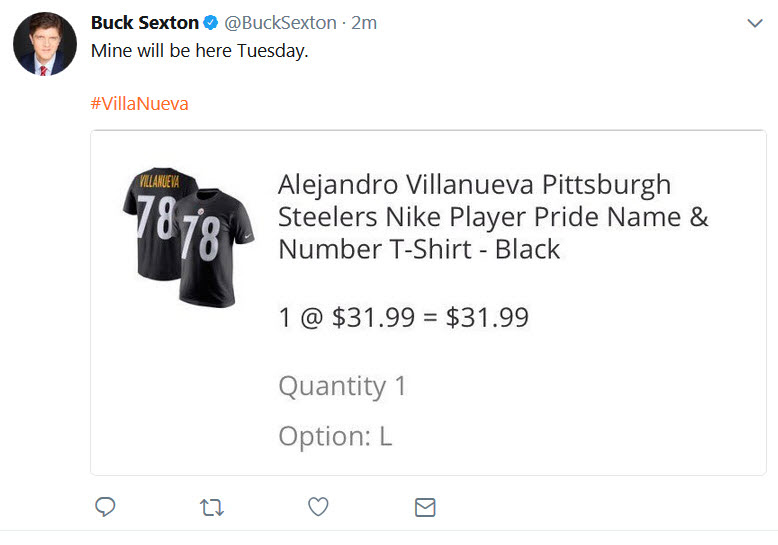 Standing. One man. Hand over heart.

.@JudgeJeanine: "All of a sudden football players are lovers of the Constitution and the First Amendment — you're full of crap." pic.twitter.com/3SDkEi6b4H
— Fox News (@FoxNews) September 24, 2017

Jeanine Pirro wasn't the only one weighing in. So did The Black Sphere's Kevin Jackson.

.@KevinJacksonTBS on athletes kneeling: "We have a president who is standing up for the flag in America." pic.twitter.com/bz9a22vTyv
— Fox News (@FoxNews) September 24, 2017 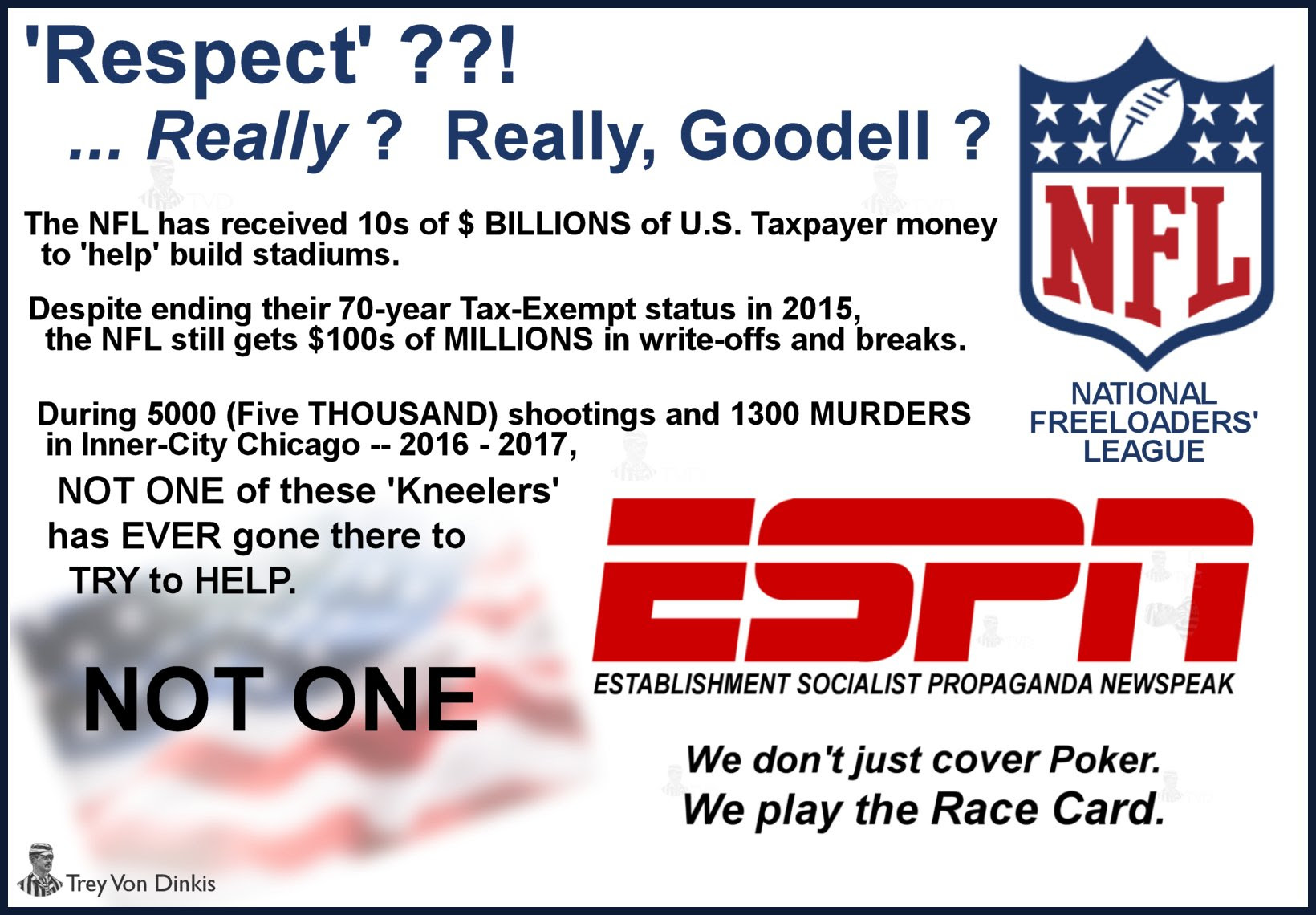 As far as the NFL is concerned -- just like Hillary Rodham Clinton -- it doesn't have a problem. Everyone else has the problem. It's everyone else's fault but theirs. And, like Hillary, they lack the ability to conduct introspection or self examination despite Captain Obvious visiting on a daily basis. 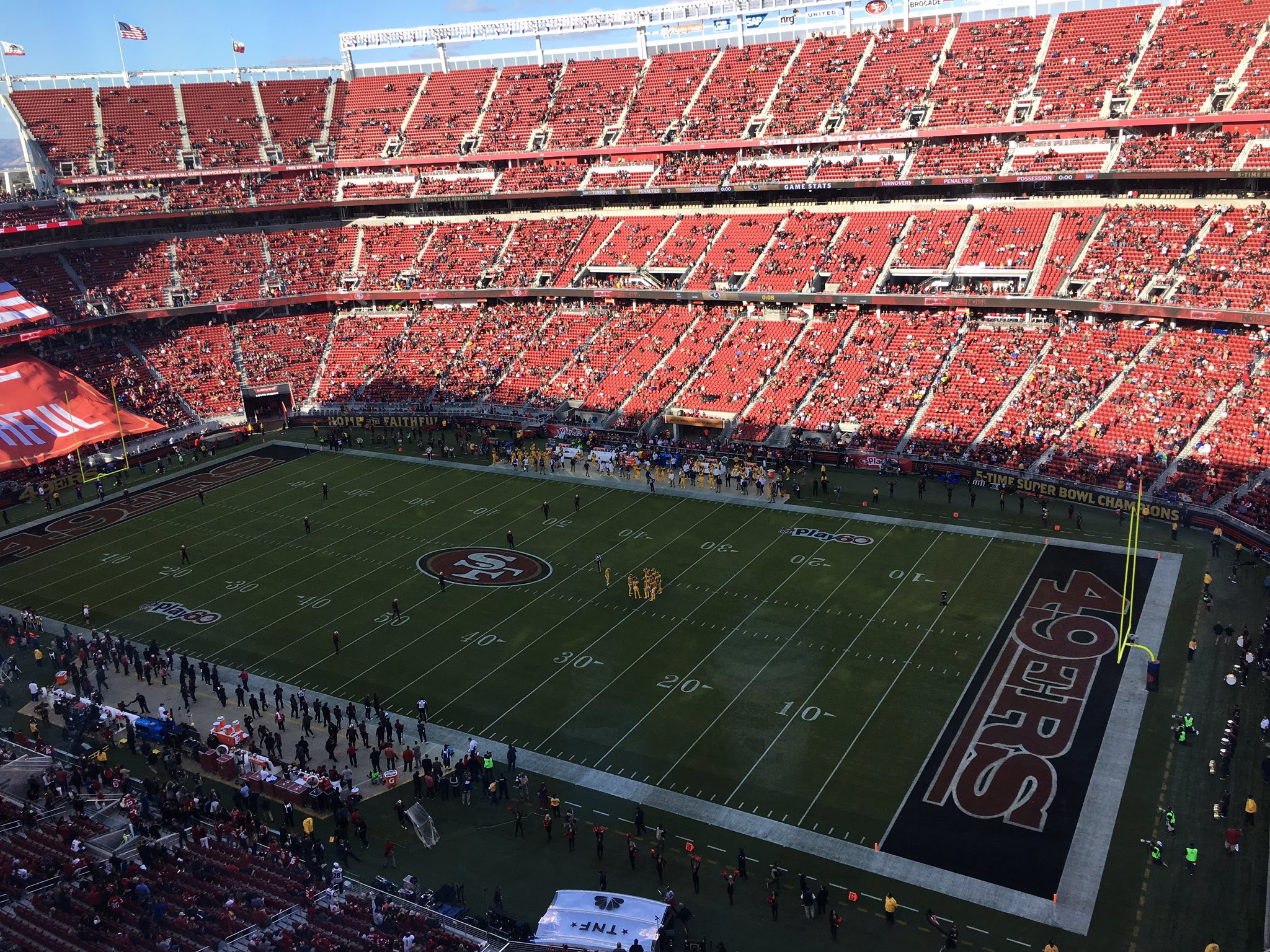 by David Hookstead The San Francisco 49ers Thursday night game against the Los Angeles Rams kicked off in front of a nearly empty stadium. Los Angeles Times reporter Lindsey Thiry tweeted a photo at the time of kickoff, which showed thousands of open seats. In fact, most sections in the photo have more empty seats than fans.

Further, we must remember the probity and innocence of the NFL players themselves, anyway. Ahem. 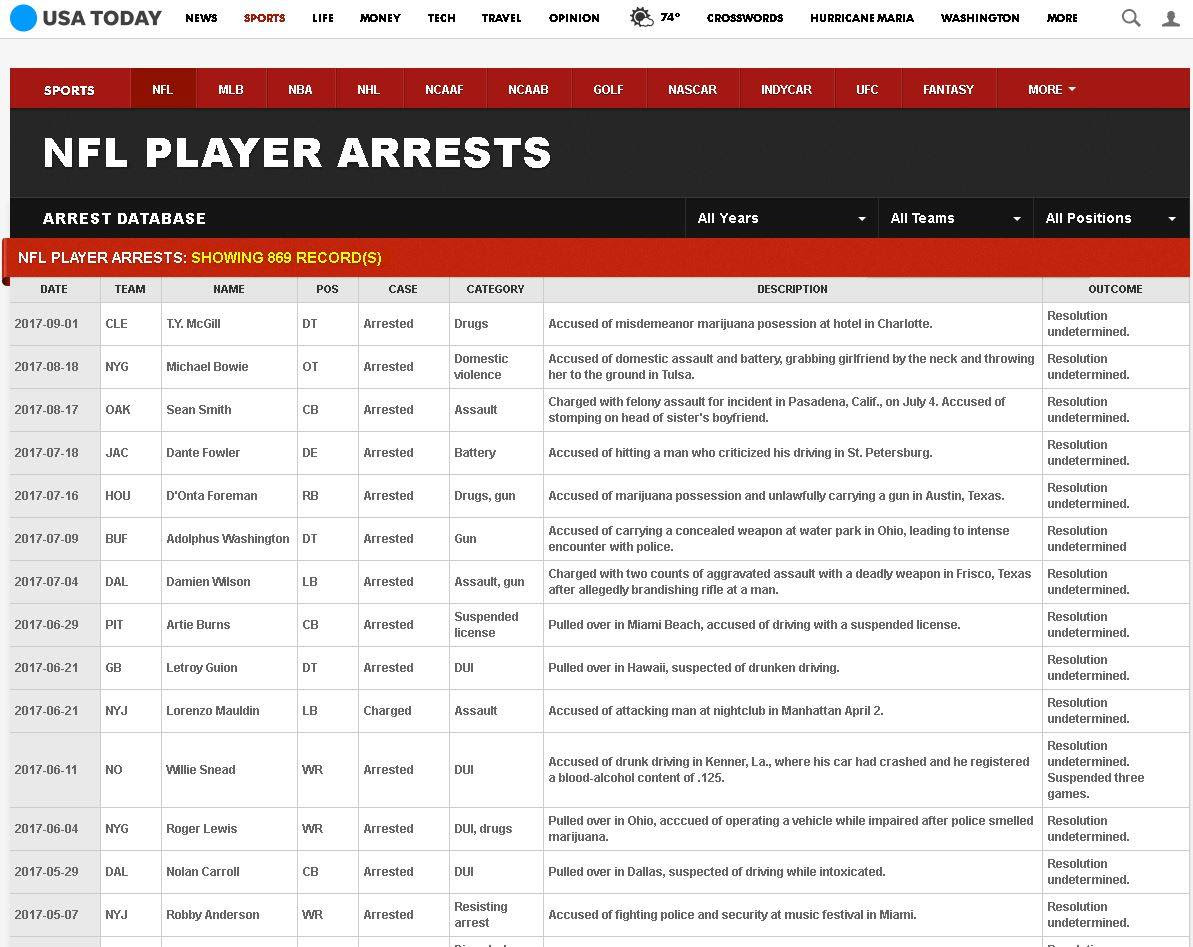 Despite what Leftists and anarchists are pushing, this is at least for the time being, a free country.

Players -- as long as there are no contractual conflicts, as with the Dallas Cowboys -- are free to take a knee and refuse to attend the national anthem all they wish.

The owners are free to support their players.

Roger Goodell is free to support all the players who take knees or refuse to attend the national anthem wholesale.

Just as I am free to write this post.

I am free to not just disagree but disagree vehemently.

I am free to stop watching the NFL and ESPN.

I am free to cut the cord to cable companies who still make me pay for channels that go against my views, such as anything having to do with Disney, ESPN, CNN, CNBC, MSNBC, CNN Headline News, Comcast, CBS, et al.

I am free to compile a list of those advertisers who support the NFL and cut their cord as well.

And I am free to publish all this information far and wide on social media, on the blog and on the air at SHR Media.com.

We are all free. For the time being.

I value honesty and clarity. So let's be honest and clear. We know why this occurs in the NFL and why it is not only accepted but in many ways encouraged. It occurs via GOWPs and guilt.

Attacks on whites & our national heritage are no passing fad. It'll only get worse as whites become a minority due to immigration#TakeAKnee pic.twitter.com/Zvu1UfEPZN
— Patriotic Mama☄ (@BluegillRises) September 24, 2017

I have said and will continue to say: "no one is equal until everyone is equal."

And even then, the picture is so much, much larger.

It's about the total dismantling of this nation, the removal of our current Constitution and Bill of Rights via the installation of the Cloward-Piven Strategy, and its subsequent rebuilding by Leftists and anarchists.

For now:
Black Sunday the 24h was the day the NFL pounded the final nail into its own coffin.