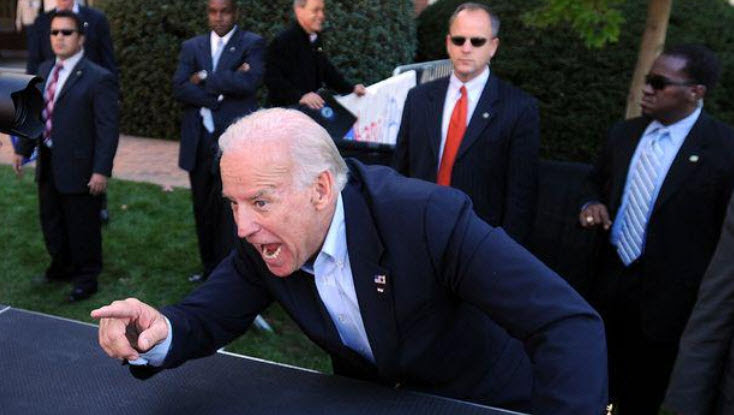 As is his frequent wont, when you counter or fail to agree with Joe Biden, he wants to "take it outside" and beat your ass.

Biden, on video, lashes out at Detroit worker in profanity-laced gun dispute

Former Vice President Joe Biden got into a heated and profanity-laced argument with a worker at a Fiat-Chrysler auto plant Tuesday while touring a factory in Detroit, after the individual accused the Democratic presidential candidate of trying to take away his Second Amendment rights.
"You’re full of shit ... I support the Second Amendment," Biden shot back, stressing he's not going to take guns away.

This after Biden stated he'd appoint Beto O'Rourke to do just that. From NationalReview.com:

by John R Lott, Jr November 2020 will be known as the gun-control election. Tuesday night, former Vice President Joe Biden announced that Beto O’Rourke “will be the one who leads” his gun-control effort. “Hell yes, we’re going to take your AR-15,” O’Rourke, a former Texas congressman and Democratic presidential candidate himself, famously promised in a debate in September. They are “weapons of war, designed to kill people efficiently on a battlefield,” he warned. O’Rourke vowed to “buy back every single assault weapon” but said that he would use force if people didn’t voluntarily agree to selling their guns. After O’Rourke’s comments, President Donald Trump tweeted that O’Rourke had “convinced many that Dems just want to take your guns away.” Biden has now locked himself into that position.

Biden tells voter: “You’re full of shit” “Don’t tell me what to do, pal. I’ll take you out and slap you!” (After man tells Joe not to point in his face)
Biden tells woman on his staff “Shush, shush!”, when she tried to defuse the situation.pic.twitter.com/8Xj2gMxo4z — Left Flank (@LeftFlankVets) March 10, 2020

Or this story from CNN:

WASHINGTON — Beto O’Rourke’s endorsement at a Dallas honky tonk on the eve of Super Tuesday gave Joe Biden a huge jolt in Texas last week. But it also came at a price, associating him with a demand for mandatory buybacks of assault-style weapons that came back to bite him Tuesday, and could haunt him into the fall.
As the former vice president stumped in Detroit, an auto worker accused him of being a gun-grabber and cited his new alliance with O’Rourke, who memorably declared at a Houston presidential debate in September that "hell, yes, we are going to take your AR-15, your AK-47.”
That inflamed gun rights advocates, who view “mandatory buyback” as a euphemism for confiscation that would violate their constitutional rights.

As well it should. Our nation is unlike any other. We are not the UK, not Germany, not Australia. Our history is different from every other nation. This country is a great experiment in progress. If it were not a great country, streaming brilliance, goodness, heart, freedom, liberty -- then people would be avoiding it. They, not surprisingly, are not.


The NRA used the Biden-O’Rourke alliance to paint the Democratic front-runner as a dangerous radical on guns, asserting that he would name the Texan as his “gun control czar,” which may not be much of a stretch.

Correct. Not much of a stretch at all. Which is why the citizen in Detroit reacted as he did. asked questions as he did, made comments as he did.


“I’m going to guarantee you, this is not the last you’ve seen of this guy," Biden told a raucous crowd at Gilley’s, his arm on O’Rourke. "You’re going to take care of the gun problem with me. You’re going to be the one that leads this effort. I’m counting on you.”

And so let's examine the bottom line at this point in time, Tuesday, March 10th of 2020. The Demorat Party is embracing:
Biden: "Don't try me, pal, you want to go outside?" Outbursts like this and easy anger are symptoms of early onset Alzheimer's. Even absent that, this is no way to attempt to "win over" the people from whom you want a vote. - “You are full of shit” - “Shush!” - “You don’t need an AR-14” - “Don’t be a horses ass” - “An AR is a machine gun!” - "I'm not working for you" Conclusion: Biden is either 1. Stupid, or 2. Addled. You don't need a president who is either or both. Then there are the Demorats and Leftists who are insisting that Trump stop campaigning "because Coronavirus." From TheAtlantic.com:


And this afternoon, Biden and his Democratic rival, Senator Bernie Sanders of Vermont, announced within a span of minutes that they were canceling their planned rallies in Cleveland tonight ahead of the Ohio primary next week. The campaigns said the cancellations were made out of concern “for health and safety” and after consultation with local officials. The separate decisions came after Ohio’s governor, Mike DeWine, a Republican, said that public-health experts had recommended banning spectators from sporting events and concerts.


Biden and Sanders have each criticized Trump for bungling and then downplaying the outbreak, yet until today, they have continued to hold rallies even as conferences, university classes, and other large gatherings are being canceled around the country.

by Betsy Klein and Sara Westwood

(CNN)As the novel coronavirus spreads across the globe and the United States, President Donald Trump's campaign is insisting the pandemic will not impact his reelection scheduling and strategy.
"What we're doing at the campaign is proceeding as normal," Trump campaign communications director Tim Murtaugh told reporters on a conference call Sunday.

So Time.com writes with great glee:

by Brian Bennett The biggest threat to Donald Trump’s re-election in 2020 may be COVID-19. The spread of the novel coronavirus is shaping up as a test of Trump’s core pitch to voters: that they are better off than they were when he took office. Sharp drops in the stock market, school and office closures, crashing oil prices and widespread disruptions to other major industries have some Trump supporters concerned that the virus is triggering a new financial crisis that could hurt Trump’s bid for a second term more than any political test he’s faced so far.

"Remember," say the Demorats and Leftists, "it's Trump who enabled Coronavirus and tanked the stocks and exposed you to destruction, chaos and a terrible death." They wish. Oh yes, they wish. From FreeBeacon.com:

by Collin Anderson, 2-4-20 Rep. Mikie Sherrill (D., N.J.) expressed frustration with her Democratic colleagues at a recent town hall, admitting they block legislation because they "don't want to give the president a win." Speaking at a Livingston, New Jersey, town hall on Thursday, Sherrill revealed the "shockingly different mindset" of congressional Democrats who prioritize resisting President Donald Trump over passing legislation that could help their constituents. "When I go, you know, I've gone up to people and said, ‘I need to get this piece of legislation passed,' and they say ‘Oh yeah, we just passed it,'" Sherrill said. "I said, ‘Yeah, we just passed it. I need the Senate to pass it and I need the president to sign it,' and they said ‘Well, we don't want to give the president a win.'"

Yet and still it appears that Sanders and Biden continuing to campaign until today is just peachy nifty.
The real issue is that they can't pull the numbers that a Trump rally can. Thusly, Trump needs to stop campaigning because, well, "it's not fair."