Three weeks from now: SHR Media is changing. Again. And no, we're NOT going away. 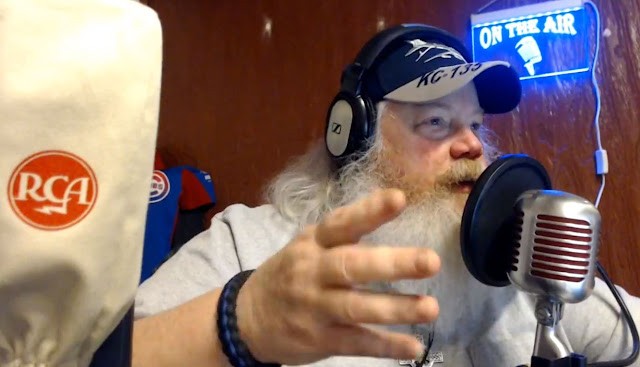 BZ sitting in his original nook on the Sack Heads Radio Show, October, 2016 -- with Clint to my right and Sack Heads Shaun working the Command Chair across the studio near the drapes.

Just a quick update on the SHR Media Network front, from BZ.

Little did I know that, stepping into the SHR Media studio for the very first time on June 22nd of 2016, not knowing Sack Heads Clint at all, knowing Shawn just a little better, I would eventually be in charge of the SHR Media Network.

Then the last broadcast of the official Sack Heads Radio Show occurred on April 4th of 2018, which included the full triumvirate of Sack Heads Shaun, Sack Heads Clint, and Sack Heads BZ.

We decided then and there, because Shaun could no longer be available for broadcasting, that we wouldn't continue without him. It would never be the same, and we decided not to try to force the issue. Without Shaun, it just wasn't the Sack Heads Radio Show. It never could be.

It would be like trying to continue Led Zeppelin without John Bonham, or Rush without Neil Peart. 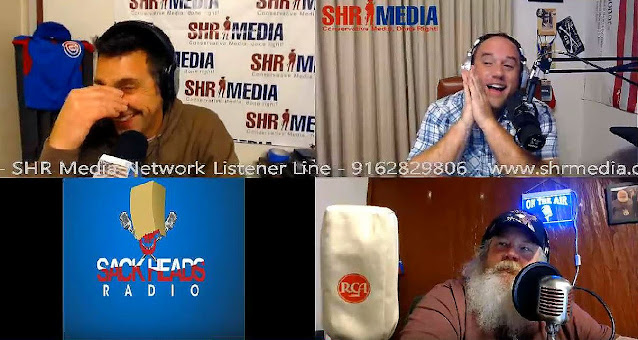 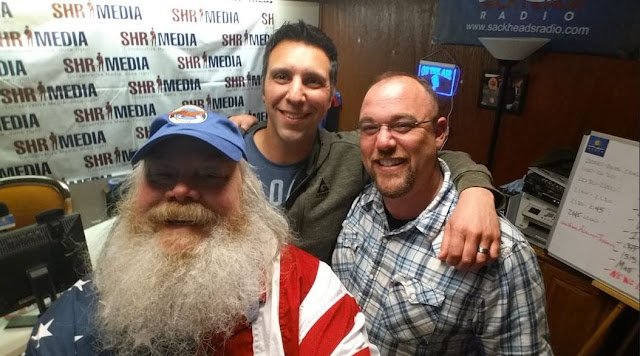 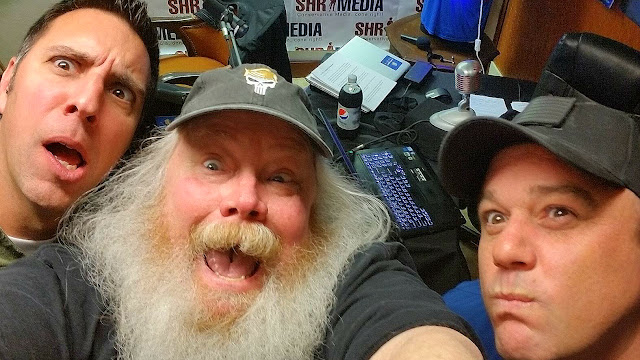 Shaun's work schedule was such that he was unavailable for Wednesday night shows.

Let's pause for a moment. There are still some personnel who are unhip as to the origin of the name "Sack Heads Radio" and its resulting logo -- showing a skull (with microphone crossbones) covered by a paper bag.

The source of that name stemmed from the fact that each originating founding member -- and then BZ -- were current or former law enforcement officers who couldn't afford to have their last names and, for a while, their photos bouncing around the internet.

Following the dissolution of the Sack Heads Radio Show -- well, that was when the SHAT Show was born, featuring Sack Heads Clint and Sack Heads BZ. Occasionally, Shaun would be able to drop in but with little consistency. Making a paycheck was paramount.

Attempting a bit of cleverosityissnesstion, the acronym SHAT was thrown out for a new show title, but it wasn't until the 4th of Cunagonda that the word congealed: the SHAT Show. Sack Heads Against Tyranny. And against tyranny we were -- as that envelope was pushed farther every month by Leftists. 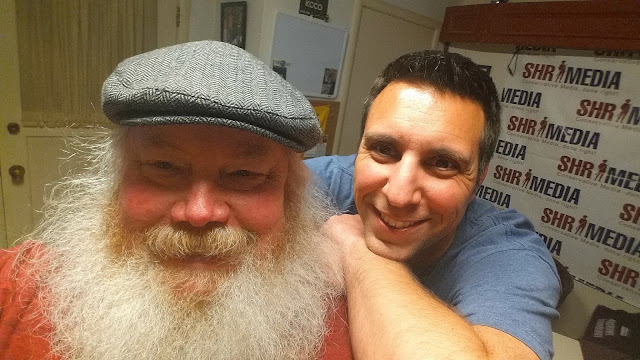 It was only coincidence that we asked people to jump into our SHAT Room, instead of a chat room.

That continued until Sack Heads Clint could no long participate in the show due, also, to multiplying work commitments himself. 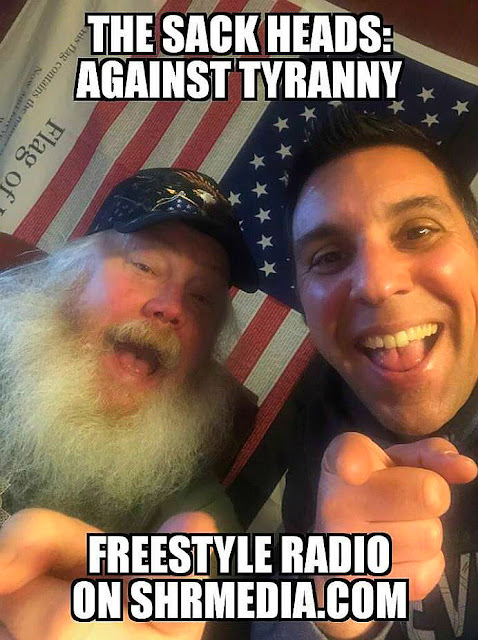 Here is the last SHAT Show which contained all three reprobates, on January 16th of 2019, with Shaun once more in the Command Chair -- though not quite so facile at the controls due to perishable skills.

And here is the very last SHAT Show -- we just didn't know it at the time -- on February 26th of 2020. The promo for the show heralded: "Yes, Contrarian Clint and the Bulbous BZ are back in rare form, ready to drink baby seal blood and sup Leftist tears all in one Conservative Cocktail of buttery political goodness!" 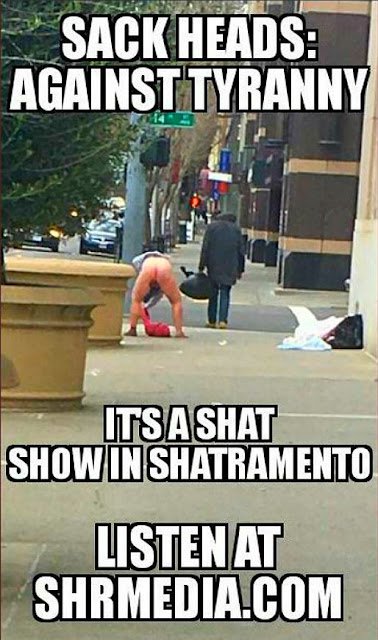 Listen to "Sack Heads: AGAINST TYRANNY, Wednesday, 2-26-20; THE RETURN" on Spreaker.

Because nothing stays the same, we were notified that the house in which the studio was contained would be sold come 2021. The final blow. 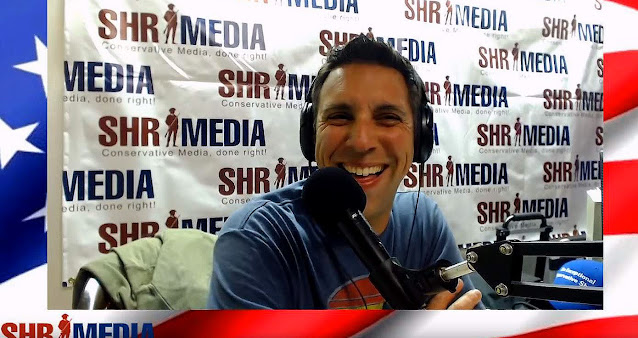 We never saw Sack Heads Clint again. He was too busy with work, given that the world of law enforcement had turned into this huge hell hole.

Then Sack Heads Shaun decided his new work would take him far from the SHR Media studios in Sacramento -- perhaps all around the nation.

That left BZ -- me -- your basic Mark I, Model I, Techno Luddite, in charge of something that requires great skills in, you guessed it. Technology.

But I decided I would not let SHR die, if for no other reason than to try to honor both Shaun and Clint, and the work they did. 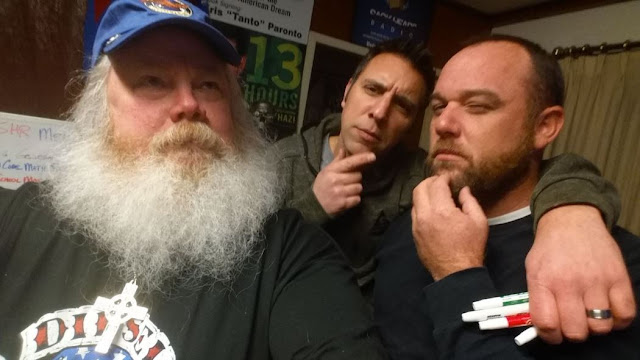 We had great times together. That studio meant a lot to me. More than Shaun or Clint will ever know.

It meant my traveling to Freedom Fest in Las Vegas, the Libertarian gathering, twice, representing SHR in 2016 and 2017. 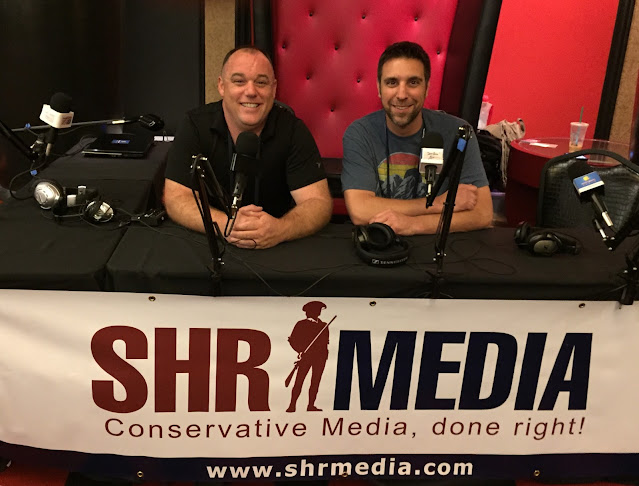 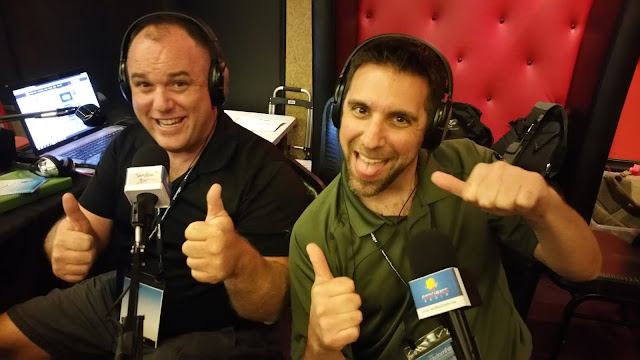 A place where I met the fabulous Ken McClenton and Dr Michael Jones. 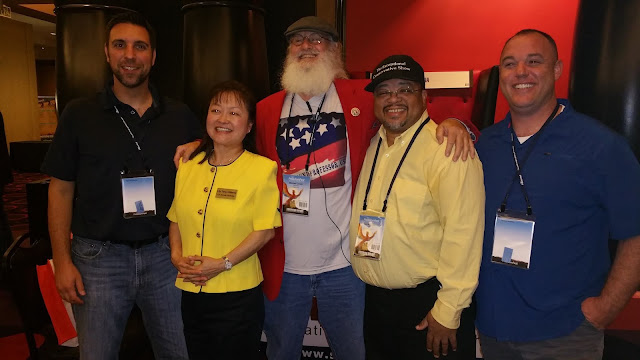 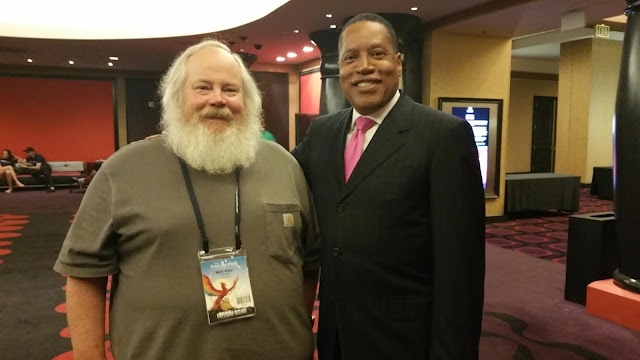 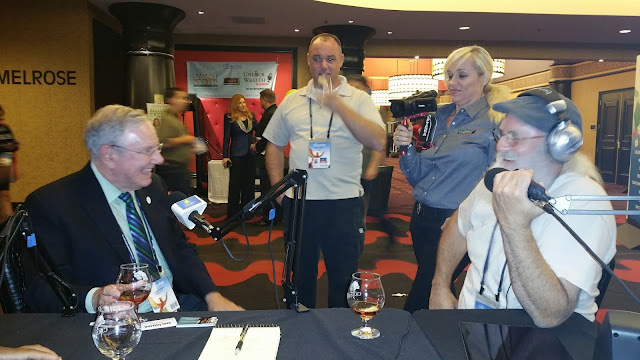 SHR invited Steve Forbes to knock down some whiskey at our booth. He kindly accepted. Shaun center, Michael Jones right. 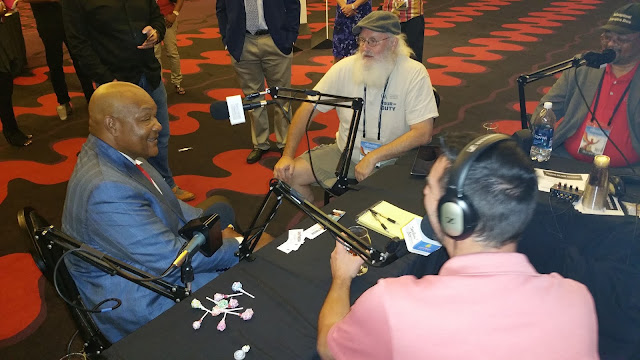 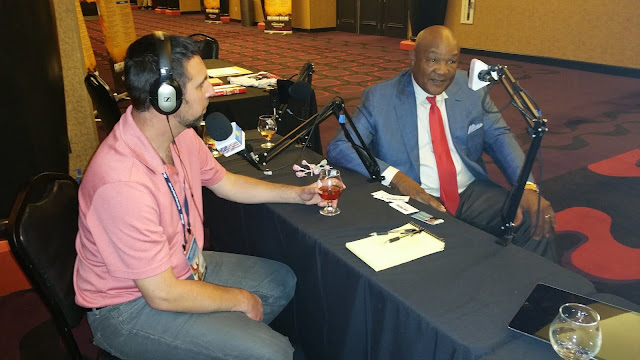 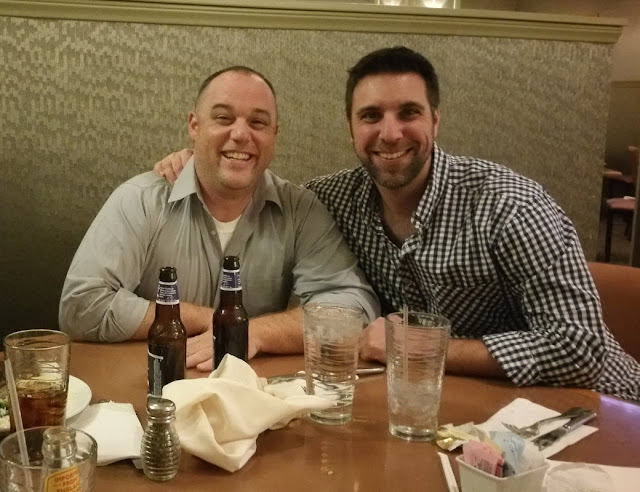 Last morning of Freedom Fest 2016, drinking at 6:30 AM, ordering breakfast, attempting to remove the terrible hangover, and smiling only when ordered for the photo. 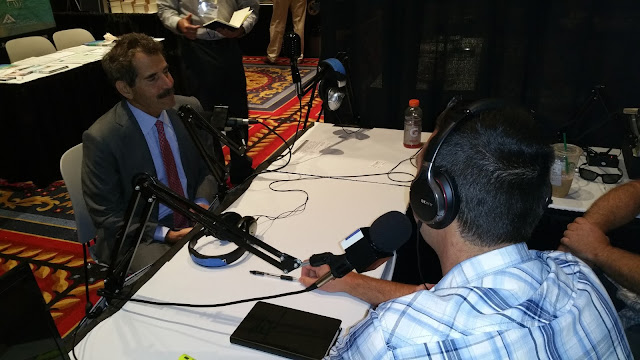 SHR interviewing John Stossel at Freedom Fest in 2017. Stossel was about 5'6" and 125 pounds dripping wet. On a heavy gravity day. Clint in blue shirt. 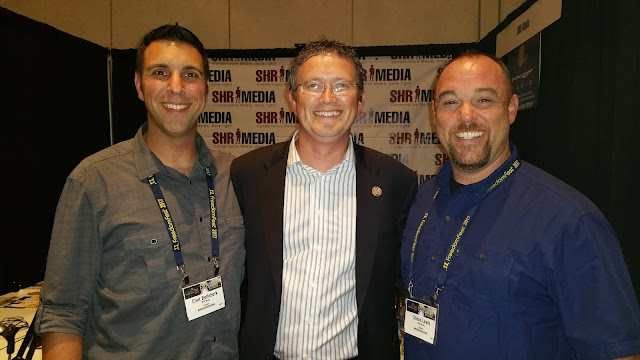 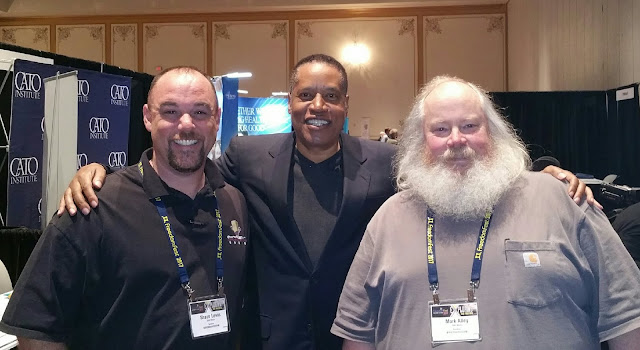 Larry Elder dropped by the SHR Media Network booth again at Freedom Fest in 2017, in order to speak with Sack Heads Shaun and Sack Heads BZ. 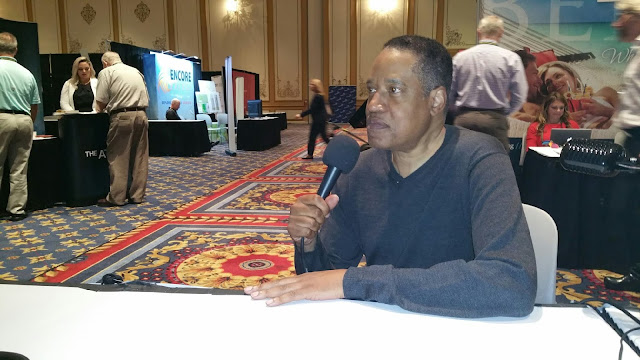 The SHR Media Network represented my retirement, my independence, my refocus on another interest, and an attempt not to throw in the towel now, not having my finger on the veritable pulse of Life.

Because in the span of one day I went from being in charge of hundreds of people, to being entirely useless. That, of course, is obviously a story for another day. 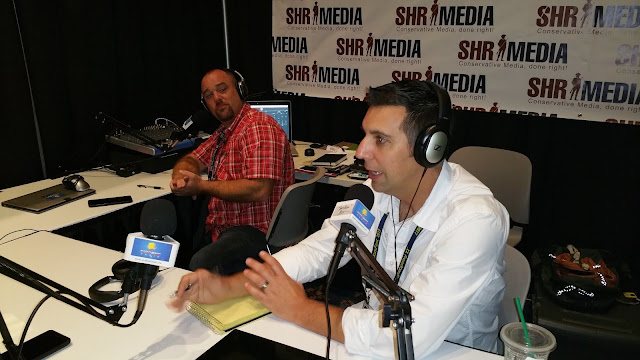 Honestly, Clint isn't coming back, and neither is Shaun. Both have moved on. I could either let SHR die or try to perform CPR or apply the AED.

I'm moving the studio the second week in May.

I will try to attract all the great hosts back to SHR. And I am going to try to expand SHR and those who come under its umbrella.