(Reprinted with permission from BloviatingZeppelin.net.) 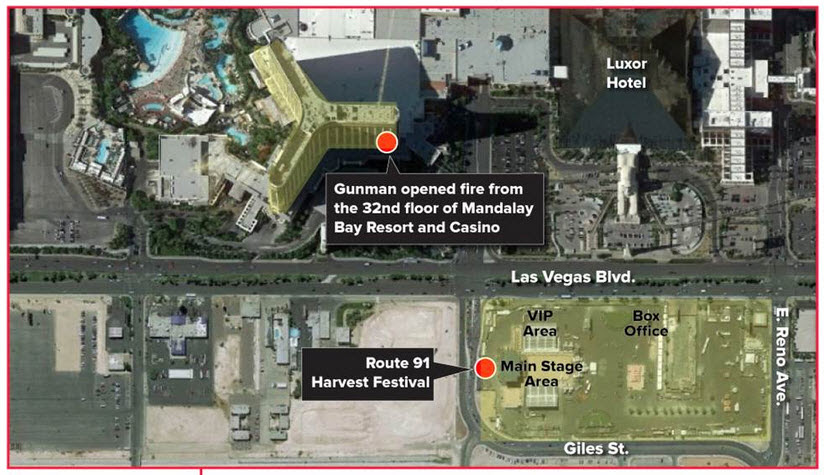 If Stephen Craig Paddock wanted to make a name for himself, he certainly accomplished that goal. He is now America's most deadly mass murderer, topping the Muslim shooter at an Orlando gay nightclub in 2016 who killed 49 persons and wounded 58 in the name of Allah.

Killing 52 people and at last count having injured at least 527, Paddock himself is an enigma. A tempest that no one yet appeared to see brewing. He cannot be consulted because he killed himself just prior to police breaching the suite. The coward's way out. Emphasizing that there is no defense against a firearm save that of others with firearms.

Paddock decided to, late Sunday night around 10 PM (October 1st), break out two windows in his large 32nd floor suite at the Mandalay Bay Resort and Casino and fire hundreds of rounds at 22,000 attendees of the Route 91 Harvest Country Music festival below. The shooting went on for about 10 minutes.

He had 23 firearms in his room and 19 more at his home. He checked into the Mandalay Bay on Thursday, September 28th, with more than ten suitcases. He had three days for planning in the suite itself. He clearly planned to target that specific concert from the Mandalay as it had the advantage of superior elevation and the least occluded field of fire, while offering a distance that would be initially confusing. People would expect the Luxor to be the obvious sniper's perch that night. It wasn't. Paddock instead chose an expansive corner suite at the Mandalay Bay. 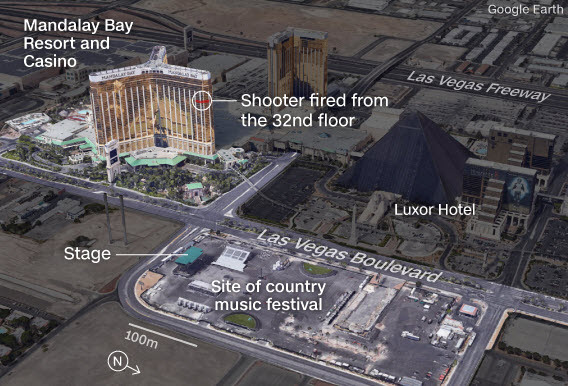 They were easy targets as Paddock utilized some of the classic "positions of advantage" in military combat and special forces tactics, that of elevation, speed, surprise and violence of action. The distance involved was roughly 400 to 500 yards.

Military concepts utilized by a man who was never military-trained.

Is this guy even remotely correct? Keep reading. Paddock had no military record. He had no criminal arrest record save that of a traffic ticket. He was not a member of a militia, hate group or most any other group. His social media was negligible. The 64-year old Paddock was a resident of Mesquite, Nevada and lived in a quiet retirement community. He was a gambler and would take junkets to Las Vegas. He won big and he lost big. He was a multi-millionaire who had property and profited from real estate and investments. He did not have close ties to his family. He was twice-divorced. His live-in girlfriend was not home when the event occurred. He had no mental illness history. He was a retiree. A former aerospace industry worker. A former accountant.


"He was just a guy," Eric Paddock said of his brother. "He lives in Mesquite, he went to the hotels, he gambled, he went to shows."


"My challenge is, I don't see any of the classic indicators, so far, that would suggest, 'OK, he's on the road either to suicide or homicide or both."


While Stephen Paddock appeared to have no criminal history, his father was a notorious bank robber, Eric Paddock said. Benjamin Hoskins Paddock tried to run down an FBI agent with his car in Las Vegas in 1960 and wound up on the agency's most wanted list after escaping from a federal prison in Texas in 1968, when Stephen Paddock was a teen. The oldest of four children, Paddock was 7 when his father was arrested for the robberies.

We know what the initial responses were and will be from the Demorats and Leftists. "It's all about the guns" they will bleat, using politics even before the bodies began to cool in the streets of Las Vegas. So typical. Hillary Clinton Tweeted "The crowd fled at the sound of gunshots. Imagine the deaths if the shooter had a silencer, which the NRA wants to make easier to get," and "Our grief isn't enough. We can and must put politics aside, stand up to the NRA, and work together to try to stop this from happening again." 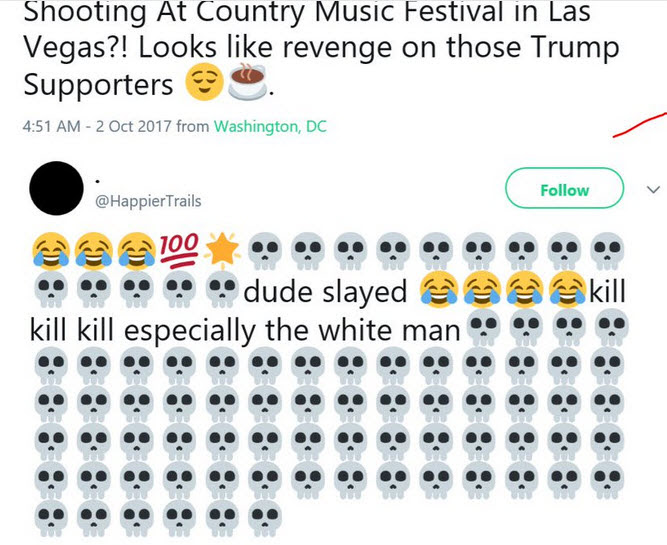 Let's not forget the above. Politics as bodies cooled.

And the expected, from the New Republic. At least they had the guts to write it.

It’s Time to Ban Guns. Yes, All of Them.

by Phoebe Maltz Bovy Ban guns. All guns. Get rid of guns in homes, and on the streets, and, as much as possible, on police. Not just because of San Bernardino, or whichever mass shooting may pop up next, but also not not because of those. Don’t sort the population into those who might do something evil or foolish or self-destructive with a gun and those who surely will not. As if this could be known—as if it could be assessed without massively violating civil liberties and stigmatizing the mentally ill. Ban guns! Not just gun violence. Not just certain guns. Not just already-technically-illegal guns. All of them.

That's rather succinct. More laws. More bans. Targeted at whom? Oh, right. Law abiding Americans who aren't involved in actions like this. More laws would not have "prevented" this shooting as Leftists bleat. 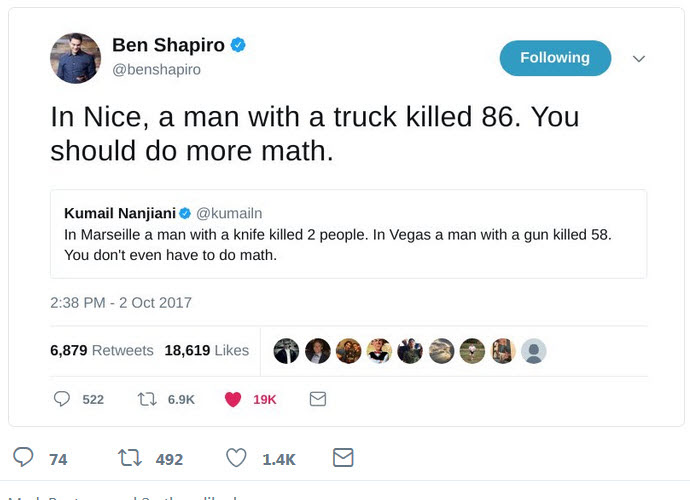 Yet, Stephen Paddock is mostly a cypher as of this writing. Let's note this, however.

Why do I get the feeling there is much, much more to this story?