[Reprinted by permission from BZ at BloviatingZeppelin.net.] 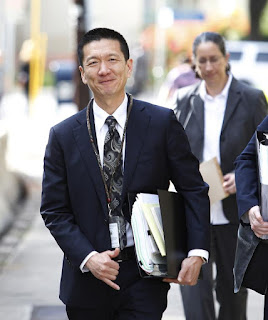 by the Associated Press
U.S. District Judge Derrick Watson issued his ruling Wednesday after hearing arguments on Hawaii’s request for a temporary restraining order involving the ban.
His ruling prevents the executive order from going into effect Thursday.
More than half a dozen states are trying to stop the ban, and federal courts in Maryland, Washington state and Hawaii heard arguments Wednesday about whether it should be put into practice.
Hawaii argued that the ban discriminates on the basis of nationality and would prevent Hawaii residents from receiving visits from relatives in the six mostly Muslim countries covered by the ban.
The state also says the ban would harm its tourism industry and the ability to recruit foreign students and workers.

Roughly the same argument as before. Judges don’t seem to understand the law, as federal Judge Derrick Watson may be educated but fails to grasp the immediacy and plain text of 8 USC 1182, as well as Fiallo v. Bell, 430 U.S. 787. He also takes not into consideration the actions of Mr Obama in 2011 and 2015, as well as the immigration drought between roughly 1921/1924 to 1965.
8 USC 1182 states:
(f) Suspension of entry or imposition of restrictions by President
Whenever the President finds that the entry of any aliens or of any class of aliens into the United States would be detrimental to the interests of the United States, he may by proclamation, and for such period as he shall deem necessary, suspend the entry of all aliens or any class of aliens as immigrants or nonimmigrants, or impose on the entry of aliens any restrictions he may deem to be appropriate. Whenever the Attorney General finds that a commercial airline has failed to comply with regulations of the Attorney General relating to requirements of airlines for the detection of fraudulent documents used by passengers traveling to the United States (including the training of personnel in such detection), the Attorney General may suspend the entry of some or all aliens transported to the United States by such airline.

4:45 p.m.
A Justice Department attorney is arguing that there’s no need for a judge in Hawaii to issue an emergency restraining order against the revised travel ban issued by President Donald Trump.
Jeffrey Wall of the Office of the Solicitor General said during a hearing Wednesday that plaintiffs have said little about harm from the ban that was not speculative.
He said Hawaii is making generalized allegations.
Wall said if the judge is inclined to issue an injunction, it shouldn’t be nationwide and should be tailored to the claims raised by Hawaii.

There, of course, will be more.
BZ